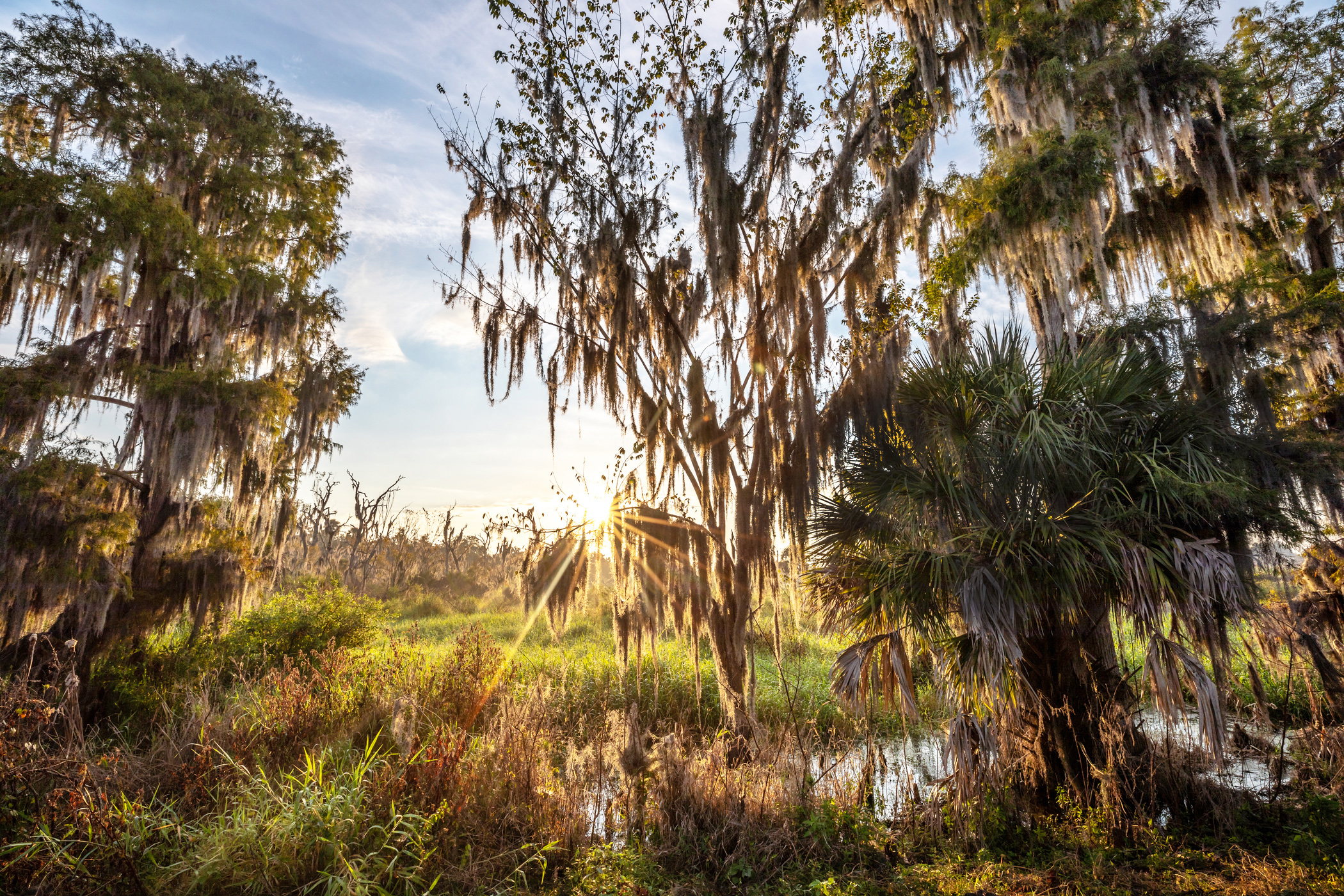 Ideally situated between the urban sprawl of Orlando and Tampa, Central Florida’s vast Polk County features Mother Nature at her finest, with thousands of acres of undeveloped wilderness, hundreds of unspoiled lakes and wetlands, and widely varied outdoors-oriented attractions for those who want to stay outside as much as possible. The fourth largest county in the Sunshine State and about the size of Rhode Island, Central Florida has lots of room to roam.

Most of Polk County is south of busy Interstate 4, though some possibilities (like Polk City and Safari Wilderness Ranch) are situated just north. The entire area has dozens of mild to wild pursuits on two feet or two wheels, on the water, in the air, and more.

The 13 completed examples of Frank Lloyd Wright architecture on the campus of Florida Southern College in downtown Lakeland is the largest and most fully-articulated one-site collection of his work in the world. Dubbed “Child of the Sun” by Wright, who designed a total of 18 structures for the college, the campus collection includes 12 structures built between 1938 and 1958 under Wright’s guidance, as well as 2013’s Sharp Family Tourism and Education Center, featuring the Usonian House, based on Wright’s design. Self-guided and guided tours are offered, and visitors should start by contacting the friendly on-campus Frank Lloyd Wright Visitor Center to check on current availability.

For kids and kids at heart, LEGOLAND® Florida Resort is simply a place that makes visitors smile. The 150-acre destination is one of the largest LEGOLAND® Parks in the world and features a mostly-outdoors mix of 50-plus rides, shows, and attractions, including a popular water ski show and a botanical garden (the former Cypress Gardens). Of course, spectacular LEGO® models are found throughout the resort’s themed zones, including Miniland USA, LEGO® Kingdoms, DUPLO® Village, and more. The resort’s newest and largest expansion in 2019 brought The LEGO® Movie™ World, immersing LEGO fans in Bricksburg from the blockbuster film, The LEGO® Movie™.

From gardens to a goat farm or a former ranch to a new marina and much more, lots of additional possibilities await visitors to Central Florida’s sprawling Polk County. There’s simply something for everyone who enjoys Mother Nature at her Florida finest.

Situated in downtown Lakeland and overlooking picturesque Lake Mirror, Hollis Garden is a Central Florida gem. Maintained by Lakeland’s Parks & Recreation department, the 1.2-acre site was constructed as a formal neo-classical European-style garden. Through various “rooms,” Florida’s domestication story is on display, starting with the Grotto, where artesian wells brought forth water as the lifeblood of the land to Native Americans and early Florida pioneers. Other rooms surrounding the pretty Rosette Plaza and Fountain (which features Lakeland’s trademark swans) include: The Tropical Room; The Herb Room; The Vegetable Room; Trees of Americana; Patterned Flowerbeds; Butterfly Garden; and various gardens focusing on single colors (like yellow, white, and red).

Just six miles to the southeast of Lakeland, Circle B Bar Reserve was once a functioning cattle ranch, which has been restored as an impressive wildlife habitat of freshwater marshes, hardwood swamps, oak hammocks, and creeks and lakes. The on-site Polk Nature Discovery Center and many trails make Circle B ideal for learning about (and seeing) Central Florida’s waterfowl, ospreys, eagles, alligators, and more.

Traditional “parks” in many forms and operated by different entities are also a big part of the great outdoors in Central Florida: the options include: three state parks (Lake Kissimmee, Colt Creek, and Allen David Broussard Catfish Creek Preserve) and a few dozen additional parks, including Lakeland Highlands Scrub (where you may catch a glimpse of a gopher tortoise along the Tortoise Trail); the Arbuckle Wildlife Management Area (part of the Lake Wales Ridge State Forest, near Lake Arbuckle, and a Great Florida Birding Trail site); and Se7en Wetlands, owned and operated by the City of Lakeland and comprised of 1,600-plus acres of marshes, swamps, uplands, and lakes.

With more than 120 different trails covering 375-plus miles, Central Florida also has an abundance of “trails” for outdoor exploration in Polk County. The options include several rails-trails possibilities (see the feature, “Florida’s Rails-Trails“)

For those whose idea of a trail is more of a fairway, Central Florida features world-class golf, as well. Polk County offers more than 40 public access golf courses designed by many of the world’s top designers, including Donald Ross, Tom Doak, and the duo of Bill Coore and Ben Crenshaw. The possibilities include the three layouts at Streamsong® Resort and Spa, The Club at Eaglebrooke, and Southern Dunes, among many.

Sports fans will also love the baseball found in the area, in that the Detroit Tigers have held spring training in Lakeland going on 85 years. And baseball in Central Florida doesn’t end when the Tigers head north for the regular season, as Publix Field at Joker Marchant Stadium also plays host to the Lakeland Flying Tigers, the Florida State League’s High-A minor league team.

Whether it’s a hot dog at the ballpark or fresh fish overlooking one of the area’s many lakes, visitors won’t go hungry in Central Florida. A few of the most popular restaurants to look out for include: Texas Cattle Company on Lake Mirror and beloved Mister Fish in downtown Lakeland; Winter Haven’s Harborside Restaurant on Lake Shipp and Harry’s Old Place on Lake Ned; Cherry Pocket Steak and Seafood Shak on Lake Pierce in Lake Wales; Peebles B-B-Q in tiny Auburndale, just off the Auburndale-TECO Trail; Gary’s Oyster Bar and Seafood House in Lake Alfred; and Crazy Fish Bar and Grill in Lake Wales. Those who work up a thirst in the great outdoors will want to head to one of many Central Florida breweries, including Winter Haven’s Grove Roots Brewing Company, Lakeland’s Swan Brewing, overlooking Lake Wire (pays homage to Lakeland’s iconic swans), and the Lakeland’s unique co-op Brew Hub Brewery & Tasting Room, which typically features more than two dozen distinct craft beers from different partner brewers. It’s a great way to say cheers to Central Florida’s great outdoors!

Head to VisitCentralFlorida.org to plan an outdoors-oriented trip and, once there, stop by Visit Central Florida’s helpful Visitor Information Center at 101 Adventure Court in Davenport, (exit 55 off Interstate 4).

Visit RVontheGo.com to book your vacation cottage or RV site for your Central Florida vacation. Sunshine and fun await!