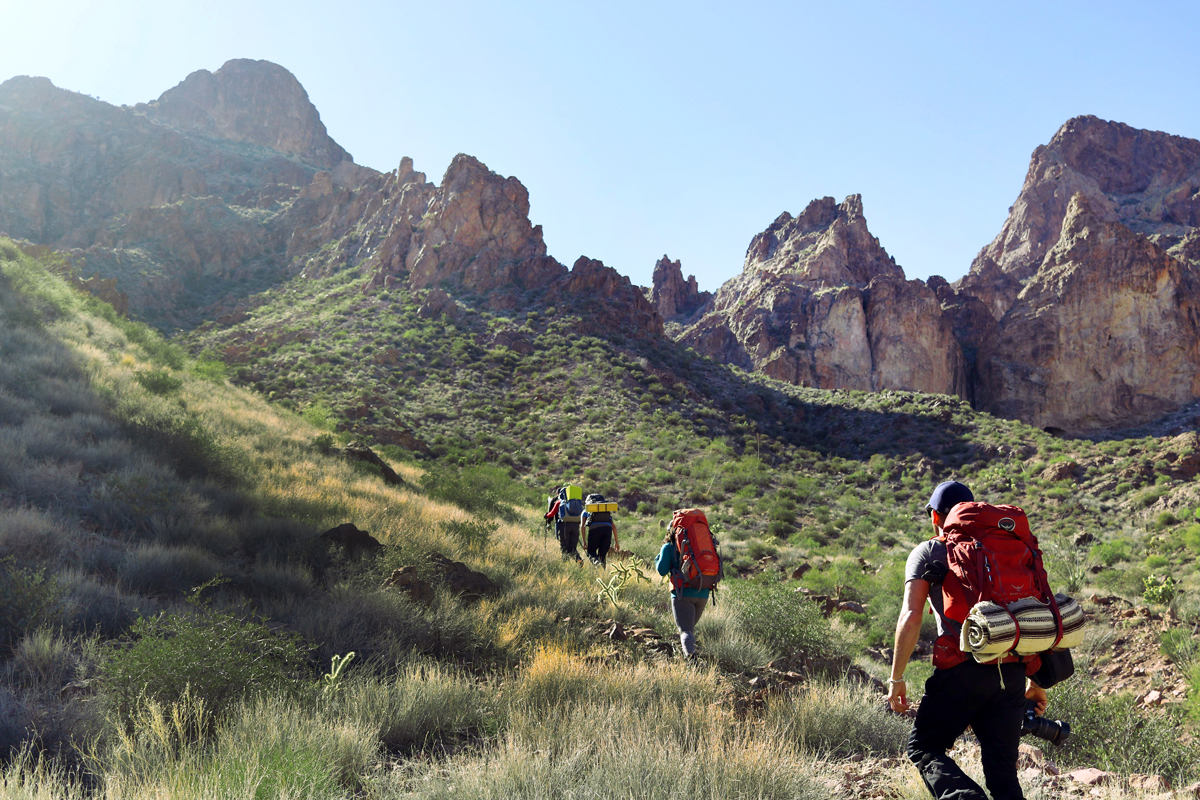 Designated as the “Sunniest City on Earth” by the folks at Guinness World Records, it’s seemingly always sunny in Yuma, Arizona (with sunshine more than 90% of daylight hours). With all of that sun, it’s only natural that Yuma is geared to the great outdoors, with lots of wide open spaces, lake and river adventures, world-class golf and tennis, open-air markets and shopping, plus much more.

“We’re really focusing on what a warm greeting you’ll get in Yuma,” says Visit Yuma’s Executive Director, Linda Morgan. “The heart of Yuma is our small businesses, which are often family-owned, and serving visitors comes naturally,” she adds. “Throughout Yuma’s history, first the Quechan people and then subsequent Yumans, have always had a spirit of generosity and hospitality.” Morgan and other locals call it ‘Yuman Nature.’

Located near the confluence of the Colorado and Gila rivers in the southwest corner of Arizona, on the border with California (the Colorado River serves as the state line), Yuma is equidistant between Phoenix and San Diego (about 180 miles from both cities), and it’s within a radius of just more than 300 miles of Tucson, Las Vegas, Palm Springs, and Los Angeles. Known as the historic ‘Gateway of the Southwest,’ Interstate 8 runs through Yuma and Highway 95 runs north to Interstate 10 and south to Mexico.

The first European explorers ‘discovered’ Yuma 80 years before the Pilgrims landed at Plymouth Rock, in that it was the safest place to cross the Colorado River for hundreds of miles. First incorporated at Arizona City in 1871, it was renamed Yuma in 1873 and is now the third largest city in the state outside the metro areas of Phoenix and Tucson (and the 11th largest Arizona city overall). The county’s permanent population is about 250,000, but that number nearly doubles with the arrival of sun-seeking snowbirds come January, February, and March.

Yuma’s unique history was shaped by the once free-flowing wild river and its subsequent damming, with the first dam completed in 1909. Like many cities, Yuma’s once-thriving downtown became somewhat of a ghost town until local leaders helped reclaim the riverfront and more, leading to the designation as the Yuma Crossing National Heritage Area. Today, historic downtown Yuma has much to offer indoors and outdoors. Situated at the end of the Gila Trail, Main Street remains the heart of “Old Yuma,” with a variety of cultural, shopping, dining, and entertainment options. More than 60,000 California-bound gold-seekers followed this one-time path to the rope ferry across the Colorado River. Part of the Yuma Art Complex, the restored Historic Yuma Theatre was built in 1911 and originally featured vaudeville acts.

The Visitor Information Center is a great place to start a visit. It’s also a perfect place for Yuma-specific souvenirs, including books, and ‘South of the Border’ goodies, such as colorful Mexican pottery and even real vanilla – no bartering required!

Part of the Yuma Crossing National Historic Landmark, Pivot Point Interpretive Plaza’s outdoor museum and its steam locomotive provide a great introduction to Yuma’s fascinating history, including photographs and stories about the Yuma Territorial Prison State Historic Park (once called the “Country Club on the Colorado,” thanks to electricity, running water, and flush toilets), Fort Yuma, the Ocean-to-Ocean Highway Bridge, the aforementioned rope ferry, the Quechan Tribe, the Southern Pacific Hotel, and more.

Those in search of Native American history will want to head to the Cocopah Museum, St. Thomas Indian Mission and the Quechan Tribal Museum Gift Shop. Ancient petroglyphs and intaglios can be found at Antelope Hill and Painted Rock, while rockhounding (‘reasonable amounts’ from public lands, for personal
use only) provides a great way to take home a unique Arizona souvenir.

Locals and visitors alike love taking advantage of Yuma’s abundant sunshine and the great outdoors. The city’s Parks and Recreation Department boasts 34 public parks, nine community centers, four swimming pools, two golf courses, two cultural centers, a theater, a visual arts facility, and more than 10 miles of walking and biking trails. This all adds up to more than 600 acres of land available for a variety
of activities.

Yuma’s wide open spaces make for widely varied hiking opportunities. Right in town, a paved multi-purpose trail runs about two miles along the riverfront, from the West Wetlands Park to Gateway Park, and along about five miles of the East Main Canal. There’s also a three-mile nature trail winding through the East Wetlands. Those up for a challenge can make like a local and head to Telegraph Pass, which is a steep four-mile trek, one-way. Any hike may reveal wildlife, including bighorn sheep, wild horses and burros, deer, and much more. Desert hiking conditions can change quickly (as can cell phone service), so layering and plenty of water are recommended – as well as leaving a hiking plan with someone.

Biking in sunny Yuma is also quite popular. For those not traveling with their own two wheels, bike rentals in town provide a great way to explore the city and beyond. Hard-core mountain bikers will find single- and double-track options in the nearby hills, including a network of trails in the Sugarloaf area. The Foothills Bike Club, Sonoran Cycles Yuma, and Mr. B’s Bicycles are three great two-wheeler resources in Yuma.

Further outdoor adventure opportunities abound in the Yuma area. The city is the ideal base for finding hundreds of square miles of wilderness in the famed Imperial, Kofa, and Cibola national wildlife refuges, comprising more than 1,000 square miles of desert, mountain, and riparian habitat in the Southwest Arizona Refuges Complex. Yuma is also a gateway to the Imperial Sand Dunes National Recreation Area, which has served as a popular movie set from the days of Rudolph Valentino to Star Wars and is one of the nation’s largest masses of inland sand dunes. And, even closer to downtown, the Yuma East Wetlands offer nearly 500 acres of wetlands, which were transformed from a trash-strewn jungle of non-native vegetation.

Of course, there’s also the Colorado River right on Yuma’s doorstep. With year-round sunshine, water fun can range from a quiet paddle to waterskiing and much more. History buffs will also enjoy the Colorado River State Historic Park, which was once the home of the Yuma Quartermaster Depot that served all military posts in
the Southwest in the mid-to late-1800s. Interesting exhibits await.

Although the damming of the Colorado River reduced the flow of water at Yuma’s doorstep, it did create a lot of backwater channels and hidden lakes upstream. These cool waters are now home to renowned fishing for largemouth, smallmouth, and striped bass, as well as flathead and channel catfish, tilapia, crappie, mullet, and bluegill. Top spots include: the Imperial Dam area, with Squaw Lake and Senator Wash Reservoir, specifically; the Imperial National Wildlife Refuge, including the meandering channel of the Colorado River, Martinez Lake and Ferguson Lake; the Picacho State Recreation Area along the California side of the Colorado River, north of Yuma; and Mittry Lake, which is just north of Laguna Dam.

Yuma County is home to two premier military installations: Marine Corps Air Station (MCAS) Yuma and U.S. Army Yuma Proving Ground (YPG). The military is the area’s second largest contributor to the economy, after agriculture (the area is known as the “Winter Vegetable Capital of the World”). MCAS Yuma is the busiest air station in the Marine Corps and supports about 80% of the Marine Corps’ air-to-ground aviation training, while Yuma Proving Ground is the county’s largest employer and, at approximately 1,300 square miles, one of the world’s largest military installations – bigger than the state of Rhode Island.

All of these outdoor activities, including fishing for dinner, are bound to make Yuma visitors hungry, and the city’s restaurants certainly step up to the plate with a bounty of options. Options for unique restaurants and local food and drink include: Cafecito (craft coffee drinks and creative small bites); Takos & Beer (creative tacos and much more, including breakfast); ‘50s-style Penny’s Diner; The Chile Pepper (fresh Mexican fare from scratch); Julieanna’s Steakhouse (with a tropical vibe, including macaws and parrots, plus live music); Lutes Casino (American and ‘South of the Border’ fare in a historic setting); River City Grill (regional cuisine from the Pacific Rim, India, the Mediterranean, and the Caribbean); and, last, but not least, Prison Hill Brewing Company (try the Warden’s Wife cream ale or the Grand Theft Hefe). It’s a great way to say cheers Yuma! If you go, head to VisitYuma.com.

An Encore RV Resort located right in Yuma, Arizona, Foothill Village is an all age resort and a great place for you and your family to make your home base while exploring exciting Yuma. Foothill Village is located within walking distance of restaurants and grocery stores, and boasts a swimming pool for those sunny Yuma days. Check out all of the Yuma-based Encore RV Resorts at RVontheGo.com.