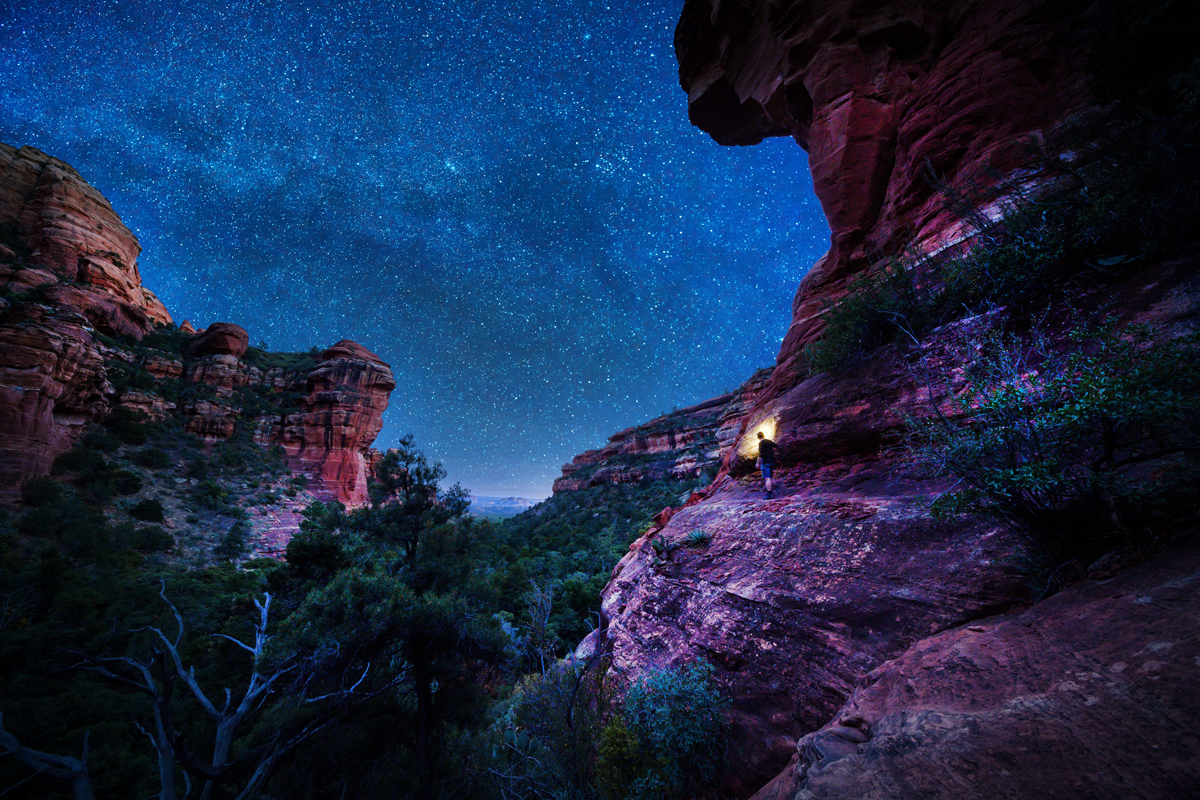 The Astrotourism Capital of the United States

With its diverse landscape –from the Grand Canyon and ponderosa forests in the north to the Sonoran Desert and ‘sky islands’ in the south – Arizona is home to more certified Dark Sky Places than any other U.S. state. In fact, no country outside the U.S. can rival Arizona’s 17 dark sky communities and parks.

Arizona helped birth the dark sky preservation movement when, in 2001, the Tucson, Arizona-based International Dark-Sky Association (IDA) designated Flagstaff as the world’s very first Dark Sky Place, thanks to the city’s commitment to protecting its stargazing-friendly night skies. Since then, six other Arizona communities have earned Dark Sky status from the IDA: Big Park/Village of Oak Creek, Camp Verde, Cottonwood, Fountain Hills, Sedona, and Thunder Mountain Pootsee Nightsky-Kaibab Paiute Reservation. Of the 17 certified dark-sky communities in the country, seven are in Arizona.

Arizona also boasts 10 Dark Sky Parks, defined by the IDA as lands with an “exceptional quality of starry nights and a nocturnal environment that is specifically protected for its scientific, natural, educational, cultural heritage, and/or public enjoyment.” The most famous of these is Grand Canyon National Park, where remarkably beautiful night skies lend jaw-dropping credence to the Park Service’s reminder that “half the park is after dark.”

Why is Arizona such a wonderful place for stargazing? The simple answers: good weather, mountainous geography, and sound stewardship. On a clear night, stargazers can see Mercury, Mars, Jupiter, the Andromeda galaxy, and more. The sky is simply awash in stars, double stars, and star clusters.

“Arizona has been a preferred location for astronomers –professional and amateurs – since the early 1900s,” says Mike Weasner, an astrophysicist who helped Oracle State Park earn dark-sky status. “It’s due to generally good weather and the mountains to get above the thicker portion of the atmosphere.”

Mountains also shield dark-sky oases from urban skyglow. In the case of Oracle State Park, which is only 20 miles from Tucson, the Santa Catalina Mountains block out the city lights. Likewise, Fountain Hills, an exurb on the northern flank of metro Phoenix, enjoys surprisingly dark nights,
thanks to the rocky veil provided by the beautiful McDowell Mountains.

Arizona has also become an influential center for space research and exploration, offering some of the best astronomical viewing opportunities for amateur and professional astronomers alike. The state is filled with observatories that are dedicated to discovering the unknown in our universe, with several of them welcoming visitors for an inside look at findings of some of the best-known astronomers in the world while learning about the past, present, and future of this star-kissed state.

As one of the oldest observatories in the nation, Lowell Observatory on ‘Mars Hill’ in downtown Flagstaff was established in 1894 and houses several telescopes from its early days. Visitors today can engage in interactive exhibits, learn about the history of the observatory, and observe the skies through both modern and historic instruments.

In addition, Sedona-based Evening Sky Tours offers stellar stargazing tours guided by professional astronomers. Their popular tours include an overview of the constellations, stories of how ancient civilizations named the constellations, and an up-close view of approximately eight objects through a high-powered telescope.

Thus, across Arizona, on rugged public lands, inside scenic city limits, and beyond, a sun-drench visitor experience doesn’t end at sunset. Because the Grand Canyon State, which is so synonymous with sunshine and blue sky, is equally spectacular when the stars come out in grand fashion.