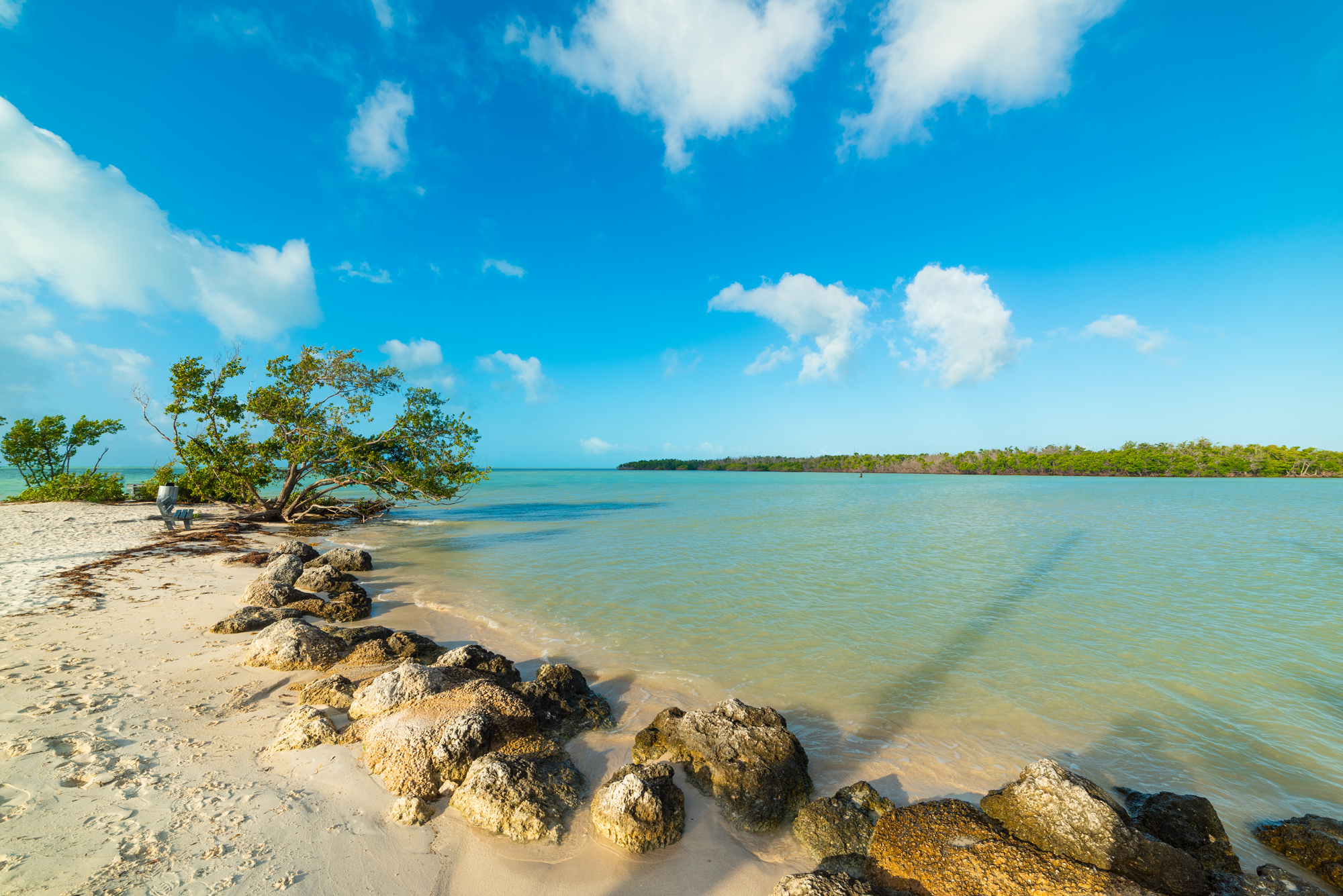 Hold on to your sunhats when we give you this statistic because it may just blow you away. Did you know Florida has 4,510 islands? Yes, 4,510 islands ranging from Pine Island, which is the largest island, to Pelican Island which is the site of America’s first animal wildlife refuge, to Sanibel Island, known for its fabulous shelling to Key West, the good time island. And there are so many more that we may never get the opportunity to enjoy.

According to visitflorida.com, wherever you are in Florida, you’re never more than 60 miles from the nearest body of saltwater. And if that’s the case, it makes sense that you’re never too far from one of Florida’s islands.

Come island hop with us and get to know Florida island-style!

Amelia Island: Located about 30 miles from Jacksonville and a little over an hour’s drive from Flagler Beach, Amelia Island has quite a history, and the best place to get to know this island is at the Amelia Island Museum of History. Originally occupied by the Timucuan Native Americans, the island was colonized around 1700 by Europeans and at different times was under rule by the French, the British, as well as Spain, and Mexico. Another bit of history on the island is Fort Clinch State Park, where visitors can see the 19th-century fort that served as a seacoast defense for the U.S. starting in 1847 and was in use as a military site through World War II. Fort Clinch also has beaches and hiking trails. Fernandina Beach, which is the island’s historic downtown, has plenty of dining and shopping. A neat way to explore the downtown area is to take one of several tasting tours offered through Amelia Island Downtown Tasting Tours.

Anna Maria Island: Located on the Gulf side, a fun fact about this island is that the buildings on the island all measure three stories or less. That is a result of a strict building code enacted to ensure the island maintains the “old-time” feeling. This seven-mile-long island is about 20 minutes from Bradenton and was a favorite shooting spot for Hollywood as several movies have been filmed on the island’s Holmes Beach. Sea turtles come ashore each summer to lay their eggs in the sand here so it’s a good spot for turtle watching. Check out the Anna Maria Island Historical Society Museum to learn about the island’s history. The museum itself is historic as it resides in an icehouse that dates back to the 1920s.

Captiva Island: Another Gulf Coast gem, Captiva, like the Gulf’s Sanibel Island, is known for its wonderful shelling due to its east/west location. Just about an hour from Fort Myers, the beaches, known for shelling and sunsets, are the draw here. If you’re looking for wildlife, don’t miss Captiva Pass where the lucky ones can see manatee and dolphins swimming about. Of course, there are shops and restaurants offering tasty seafood dishes and a Farmers Market that runs every Tuesday from November through April.

Key Biscayne: Visitors to Miami will want to take the scenic drive over the Rickenbacker Causeway to visit Key Biscayne. The island’s Bill Baggs Cape Florida State Park is well worth a visit and has plenty of opportunities for biking, hiking, fishing, paddling, and beach time. Don’t miss the historic 1825 Cape Florida Lighthouse. Crandon Park is another option for enjoying the Florida sun while partaking in such activities as windsurfing, snorkeling, and canoeing. It is also a great spot for birdwatching and is part of the Florida Birding Trail.

Merritt Island: As one of Florida’s largest islands, Merritt Island is a neat mix of technology and nature being home to both the NASA Kennedy Space Center and the Merritt Island National Wildlife Refuge. The Kennedy Space Center contains so many great exhibits including the U.S. Astronaut Hall of Fame and the Rocket Garden, an outdoor installation of rockets including the Mercury-Redstone which was used in the early days of our space program. Visitors to the Merritt Island National Wildlife Refuge can fish, bird watch, and hike. The seven-mile drive, known as the Black Point Wildlife Drive, is a great way to see the island’s wildlife.

Sanibel Island: From Fort Myers, Sanibel Island is about 40 minutes away. And like nearby Captiva Island, shelling is a big draw here and the island has been named by Travel and Leisure magazine as the best shelling spot in North America. Another big attraction on the island is the J.N. “Ding” Darling National Wildlife Refuge, which covers over one third of the island. Visitors can hike, bird watch, take a leisurely 4-mile Wildlife Drive and hope to glimpse waterbirds and shorebirds, as well as raccoons, alligator, marsh rabbits and the occasional bobcat. Waterfront restaurants at sunset provide the double pleasure of great food and even more spectacular views.

The Keys: The Keys are actually a stretch of islands beginning at the southeastern tip of the state and are made up of roughly 1700 islands. For our island-hopping purposes, we’ll focus on the better-known islands of the keys, including Key West and Key Largo, which are accessible via the Overseas Highway.

Key Largo: Highlights of Key Largo include John Pennekamp Coral Reef State Park which is home to the statue Christ of the Abyss, a nine-foot tall bronze statue that is submerged off the coast and can be viewed up close during a snorkeling tour. As the first underwater state park in the US, this is the place for snorkelers. Another fun option when visiting Key Largo is to take a glass bottom boat tour. More cruising can be had aboard the African Queen which runs daytime and dinner cruises aboard the vessel made famous in the movie of the same name.

Key West: Two things that are a must here – taking a photo with the iconic buoy that marks the “Southernmost Point in the Continental U.S.A,” and visiting the Ernest Hemingway Home and Museum. Bustling Duval Street, which is the main drag through town has galleries, shops, bars and restaurants, and a bevy of beautiful Victorian homes. A great way to get to know Key West is by taking the hop-on/hop-off trolley tour that makes 12 stops around town. Museum-wise, aside from the Hemingway experience, consider a visit to the Key West Shipwreck Treasures Museum with two floors of exhibits and artifacts related to shipwrecks in the Keys.

Big Pine Key: Aside from being home to Sunshine Key RV Resort and Marina and the Sunshine Key Tiny House Village, Big Pine Key is known for Bahia Honda State Park and the National Key Deer Refuge. Bahia Honda is a great place for all kinds of outdoor fun from kayaking to bicycling as well as fishing, swimming, and hitting the beach. Don’t miss the photo op at the Bahia Honda Rail Bridge. The endangered Key Deer can only be found in the Lower Keys and the National Key Deer Refuge was established in 1957 to protect the Key Deer as well as other species found in the area.
A visit to the Refuge also provides opportunities for saltwater fishing and catching some great pics.

Islamorada: Immerse yourself in the rich history of The Keys with a trip to this island’s History and Discovery Center which tells the history through exhibits and documentaries shown in a state-of-the-art theater. Exhibits include the history of pirates, shipwrecks, the indigenous people, and the development of The Keys.

Marathon Key: Dolphin lovers should definitely make sure to visit Marathon Key which is home to the Dolphin Research Center where visitors can see dolphins and sea lions up close. The Center even offers a swim with the dolphins experience! The island is also home to the Turtle Hospital which provides rehabilitation to injured sea turtles, with a goal to release them back to the sea. There are plenty of beaches on Marathon Key to enjoy including Sombrero Beach that has picnic pavilions and is a favorite for nesting turtles.

So, which islands will you be visiting? You may not make
it to all 4,510 islands Florida has to offer, but this list is a great start!

Visit RVontheGo.com to book your site for your next Florida vacation. Sunshine and island fun await!