Totally Tourist in the Pacific Northwest 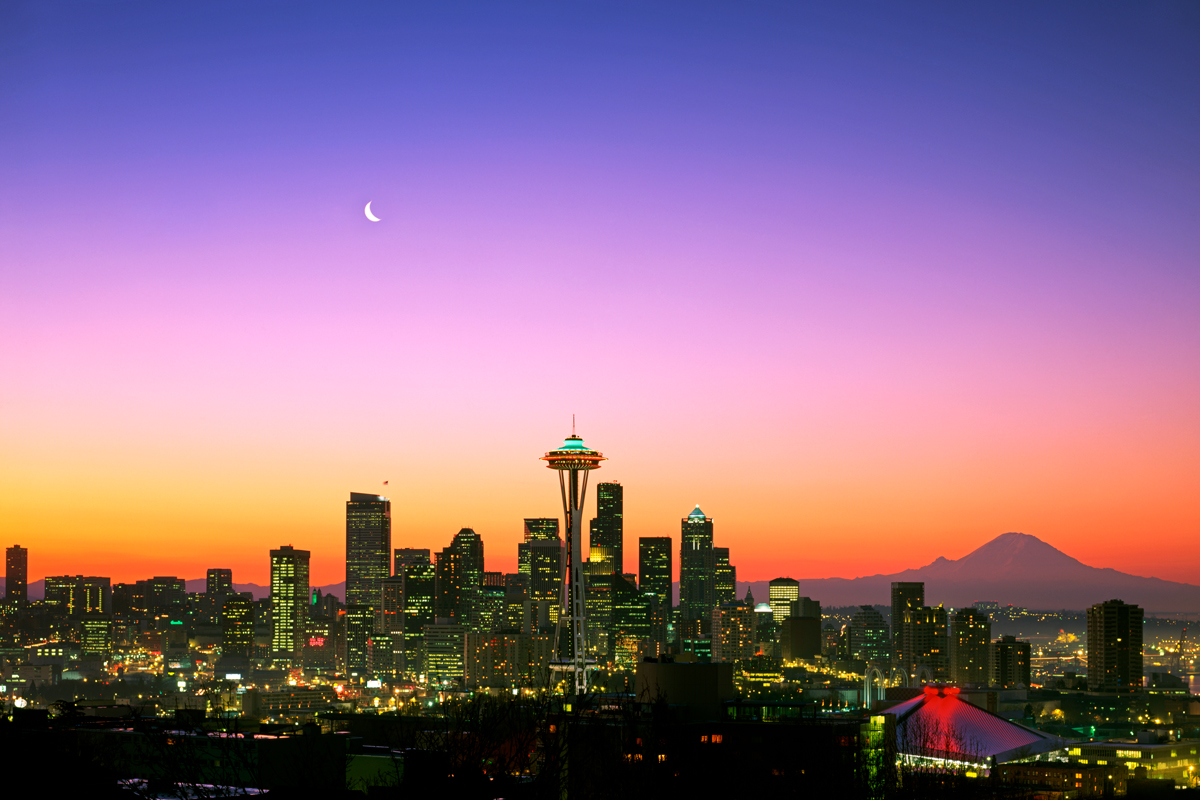 When it comes to ideal places to visit that will satisfy just about everyone in your travel group, the Pacific Northwest fits the bill. It has some of the best when it comes to the great outdoors with plenty of mountains and beaches for activities like hiking, biking, water sports, and beachcombing. It has cool cities like Seattle and Portland as well as the lesser-known but definite must-see locations, such as Bend, Oregon, and Leavenworth, Washington. There are museums and markets, brewpubs and wine trails, historic sites and natural wonders, all waiting to be seen.

Let’s play tourist and see what you should see and do when visiting Washington and Oregon.

The city of Seattle, while not the capital city of the Evergreen State, is the largest city in Washington. Nicknamed the Emerald City because of its abundance of year-round greenery, Seattle offers plenty when it comes to tourist attractions.

Built for the 1962 World’s Fair, the Space Needle is an observation tower soaring 605 feet into the sky. Visitors can travel to the observation deck, some 500 feet into the tower, and see panoramic views of the city.

Pike Place Market has the distinction of being one of the oldest, continuously operated Farmers Markets in the U.S. Opened in 1907, the market continues to offer visitors an experience like no other. From fresh fish purveyors (don’t miss the flying fish “show”) to produce, fresh flowers, spices and herbs, antiques, and vintage clothing, it’s all here.

The name of this don’t-miss attraction, the Museum of Pop Culture, doesn’t leave you wondering what you’ll find here. The focus here is exactly that…pop culture with permanent and traveling exhibits dedicated to pop culture icons like Nirvana, Jimi Hendrix, fantasy films like The Wizard of Oz and Harry Potter, and Marvel’s gang of superheroes.

If you want to experience a little bit of Bavaria without leaving the country, take a day trip (or stay for several days) to Leavenworth, which is about a two-hour drive from Seattle. Leavenworth is a Bavarian-styled village that has more charm than you can imagine. There’s a reindeer farm, a nutcracker museum, wineries, distilleries, and breweries, and all kinds of outdoor fun including hiking, fishing, and biking.

Washington State oddities (think: roadside attractions) can be found around the state and if you’re willing to take the drive, don’t miss the Hat n’ Boots in Seattle’s Oxbow Park. Yes, they are exactly that – a hat and boots but the hat is a 44-foot-wide cowboy hat while the boots are 22-feet tall. Head to Chehalis to see a giant yardbird. Built as larger-than-life black bird mascots in 1969 for a home improvement chain store, you can find one of the remaining mascots at the Yard Birds Mall in Chehalis. How about a giant frying pan? Head to Long Beach and see this 9-foot by 6-foot culinary tool. Looking to offer up some prayers for a safe and successful road trip? Check out the Wayside Chapel in Monroe, big enough for eight people to “Pause, Rest, and Worship” as the sign outside the chapel reads.

Seasonal Tourist: Don’t miss Leavenworth in December when it transforms into a holiday wonderland with thousands of twinkling lights and a full schedule of merriment. Another must-see is the Skagit Valley in April when the fields are awash with thousands and thousands of blooming tulips and the area hosts the Annual Tulip Festival.

Portland has gained a reputation in recent years as one of the hippest towns around, probably thanks to its bookstores, coffee shops, and craft breweries. And, aside from these friendly, welcoming venues, there is more to Portland than reading, eating, and drinking!

Opened in 1892, the Portland Art Museum is the oldest art museum on the West Coast. Collections include Asian and European art as well as Native American and Northwest Art.

If you prefer to view your art outdoors, consider the Portland Street Art Loop Hike, a roughly 3.5-mile hike around the city to view the amazing works of street artists.

Visit oregonhikers.org/field_guide/Portland_Street_Art_Loop_Hike to see a map and locations of the more than 30 unique and colorful murals.

If you wanted to be transported to another world, and a serene one at that, spend a day at the Portland Japanese Garden. Set on 12 acres, the Portland Japanese Garden provides visitors eight unique gardens to enjoy including the Tea Garden with an authentic Tea House, the Zen-focused Sand and Stone Garden, and the Strolling Pond Garden, which is the largest garden, complete with a Moon Bridge and koi fish.

If a smaller city is more to your liking, check out Bend, a picturesque little town located on the banks of the Deschutes River. Bend is an outdoor lover’s paradise, but don’t think that’s all Bend has to offer. Indoor attractions can include the High Desert Museum, a history and culture museum about North America’s high desert country, and its people. For shopping, restaurants, and entertainment, check out Bend’s Old Mill District, the site of two former lumber mills that has been transformed into a bustling mix of boutiques, eateries, galleries, and music venues. Another self-guided option for scenic fun includes the Roundabout Art Route where you can view over 20 public art pieces in Bend. The Bend Visitor Center has maps of the route.

Oregon roadside oddities include the 31-foot Paul Bunyan statue in Portland, the Peterson Rock Garden and Museum in Redmond (just outside Bend), which is a rock collector’s vision come true with its quirky replica statues of the Statue of Liberty, among others. Then there’s the Octopus Tree in Tillamook, a centuries old Sitka Spruce that looks oddly like the eight-armed sea creature. Of course, the Oregon attraction not to be missed is Haystack Rock, which can be found at Cannon Beach. This 235-foot sea stack is one of the most iconic images of the Oregon coast and literally millions of photos have been taken of the rock from sunrise to sunset providing an amazing shot each time!

Seasonal Tourist: Don’t miss Lincoln City’s Fall Kite Festival that includes a sky full of colorful kites as well as kite-flying and kite-making demonstrations or the Cannon Beach Sandcastle Contest each June. A spring visit must include Florence’s annual Rhododendron Festival held each May that pays tribute to the hundreds and hundreds of blooming rhododendrons along the Oregon coast this time of year. ⎯

Note: In the current COVID-19 climate, please check to see if any of these locations are open or operating under abbreviated hours or have partial closings of attractions and facilities due to the pandemic.