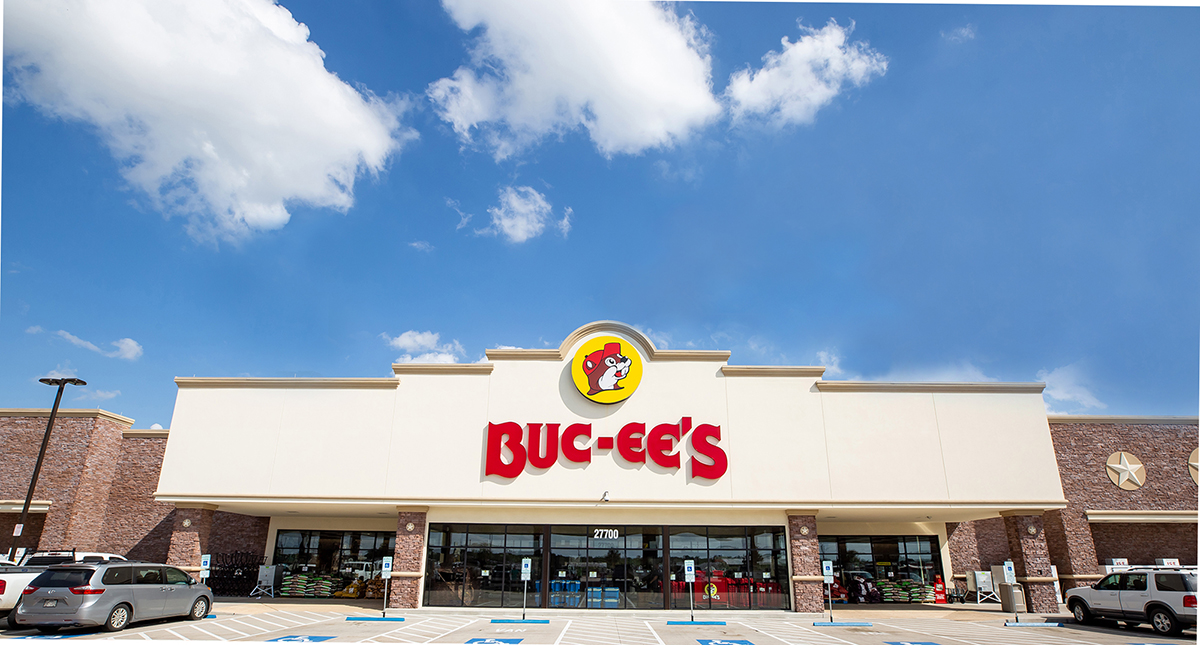 hey say everything is bigger in Texas. And that is certainly true for Buc-ee’s, a legendary convenience store/travel center headquartered in Lake Jackson, Texas.

Back in 1982, Arch “Beaver” Aplin III, a young Texas A&M University graduate, decided to open a typical convenience store on a whim, with the goal of offering the best selection and service in the category.

Fast forward 39 years and today, Buc-ee’s has 43 locations in four states (Texas, Alabama, Florida, and Georgia) with expansion plans into three additional states (South Carolina, Kentucky, and Tennessee) to celebrate their 40th anniversary, as well as an equal partner in Don Wasek. But what makes Buc-ee’s not your run-of-the-mill convenience store is their “everything is bigger in Texas” attitude and approach.

With each subsequent opening since the original, the stores have gotten larger, with additional merchandise like on-site kitchens preparing sandwiches and breakfast tacos, clothing, and fishing gear. But the constants have always been clean restrooms and cheap ice. As well as the name and logo – an homage to Aplin’s mother’s nickname for him, “Beaver,” and his beloved Labrador retriever, Buck.

In 2003, Aplin and Wasek decided to enlarge their footprint even more with the opening of a travel center, offering more of, well, everything. The largest of the travel center concept – representing half of their stores today – is 68,000 square feet (which could hold about 22 average-sized 7-Elevens or two average-sized Whole Foods stores) in New Braunfels, Texas, and is the flagship of the expanding company.

It’s definitely not your run-of the-mill convenience store, in that the New Braunfels location boasts 120 gas pumps, 1,000 parking spots (don’t be fooled, it’s not a truck stop, however, in that Buc-ee’s doesn’t allow 18 wheelers at their gas pumps), 80 fountain dispensers, 64 ice freezers, and 27 cash registers, not to mention 24/7 restrooms with more than 33 urinals and
50 toilet stalls.

Although perhaps a bit smaller, the other travel centers in the chain have a similar breadth of merchandise and variety, including: freshly roasted nuts; dozens of Icee flavors – including rarely seen concoctions like Dr. Pepper and Big Red; coffee stations with a selection of flavored creamers that will boggle the mind; a fountain soda bar that comes close to the size of a football field; more than a dozen jerky flavors, including several wild game options; fudge made in-house in special kettles; rows of their own sugary, caramel-coated corn concoction, Beaver Nuggets, along with the Nuggets’ savory cousin, Buc-ee’s Nug-ees, a cheesy, salty puff; and the traditional assortment of convenience store packaged food stuffs and beverages. According to Bon Appetit, Houston chef, Ford Fry calls Buc-ee’s, “the gold standard for road trip junk food.”

For the culinary connoisseur on the road, Buc-ee’s is home to the Texas Round Up BBQ bar. Cooking up barbecue all day long in a state that knows a thing or two about ‘cue, brisket, sliced sausage, turkey, and other fresh made-to-order sandwiches and tacos are available around the clock. Alternatively, visitors can satisfy their sweet tooth with a dizzying array of kolaches, a fruit-filled sweet pastry that found its way to Texas by way of Czechoslovakia. According to Aplin, Buc-ee’s isn’t a restaurant in a typical tradition because of its to-go format. However, they have put a lot of thought into manageable foods that can be eaten in your lap while driving. In addition to these tasty Texas traditions, the menu items and merchandise mix is changing to highlight local and regional specialties of Buc-ee’s new locations.

It’s not just the food that makes people call Buc-ee’s the Cadillac of convenience stores. They also stock all kinds of apparel, hunting and sports paraphernalia, toys, jewelry, household décor, religious items, artwork, locally grown and made products like sauces, preserves and produce, and all kinds of Buc-ee the Beaver products like hats, t-shirts, and stuffed animals.

But, perhaps, Buc-ee’s is best known for their pristine restrooms. With the New Braunfels flagship location being named “Best Restroom in America” in 2012 by Cintas, the industry leader in restroom supplies, Buc-ee’s bathrooms are enormous, featuring spacious entryways with bright lighting, solid doors between stalls, and are maintained 24/7 by uniformed employees whose sole responsibility is to keep them immaculate. Obviously, Aplin and Wasek are no fools. They know that to get to the restrooms, customers must walk past all those tasty rows of food, beverages, merchandise, and tchotchkes.

Visit www.bucees.com for information about the
nearest Buc-ee’s for your
next road trip.