The Best BBQ in the U.S. 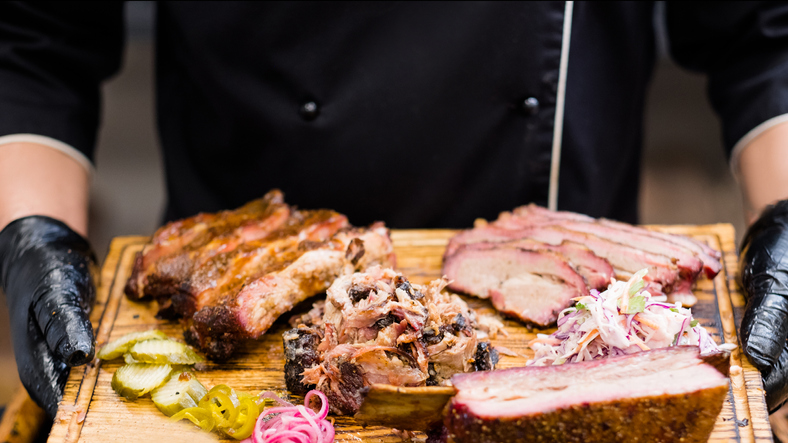 From meat preferences to style and flavor, see what regions claim to have the Best BBQ in America.

Similar to conversations about religion, politics, and sports teams, a conversation about the best BBQ in the country can get equally heated. That’s because our country has several different BBQ regions and depending on where you grew up or where you had your first BBQ experience, allegiances are formed and tough to break.

Let’s do a virtual BBQ Road Trip and see where these regions are and why they proclaim to have the Best BBQ in America.

Texas: Texas BBQ originates with the Czech and German settlers in the area. Couple that with Texas being cattle country and you’ve got BBQ focused on beef brisket with no-nonsense cooking, or smoking. Toss in the woods used to cook the BBQ, which include hickory, oak, pecan, and mesquite, and you’ve got one tasty tradition. Typically served up on a piece of butcher paper with two thick slabs of plain white bread and a few pickles, Texas BBQ is a big deal. To add to the confusion of which BBQ and where, Texas BBQ divides itself even further into Central, East, South, and West Texas-style BBQ. The common denominators among the different styles are rubs, woods, and cut of meat.

Carolinas: BBQ in the Carolinas typically serves up pork versus beef and then to further muddy the BBQ waters, the sauces vary based on the region where it’s cooked up. There are vinegar-based sauces and condiment-based sauces (like ketchup and mustard). Can we say vinegar is North Carolina and tomato is South Carolina? Maybe, but that may be argued. FYI, there is also a long-running dispute as to whether BBQ originated in North Carolina or South Carolina. As we’re sure you can guess, proponents of each have strong arguments. Either way, Carolina BBQ is the ideal meal served up with some slaw and a big dose of Southern hospitality.

Memphis: Memphis BBQ is primarily pork with BBQ ribs and pork shoulder being the favored way to serve it up. BBQ pits are perfect for the slow-cooking method needed to make the meat fall away from the bone. There are still some choices to make – will the meat be “dry” – using a rub made of spices and salt and served with no sauce or “wet,” which means the meat is sauced before, during, and after cooking. Memphis loves its BBQ as well as a good BBQ competition. Since 1975, the city has been the host of the World Championship Barbecue Cooking Contest (WCBCC) which has grown to be the largest pork barbecue contest in the world.

Kansas City: If there’s one thing that sets apart Kansas City BBQ from the other regions it’s that they will BBQ anything – pork, beef, lamb, turkey, chicken, and fish. Another thing unique to KC BBQ is their love of burnt ends – which are the fatty, and sometimes tougher, portion of a brisket. And typically, there’s just one sauce – sweet and smoky at once, thanks to the brown sugar, molasses, and tangier spices like chili powder and allspice.

That’s a lot of information to digest. And, in the end, it’s really about what you like or regardless of what you like, are you willing to try something new when it comes to BBQ?