Exploring Wilmington, North Carolina From Battleships to Beaches and Beyond 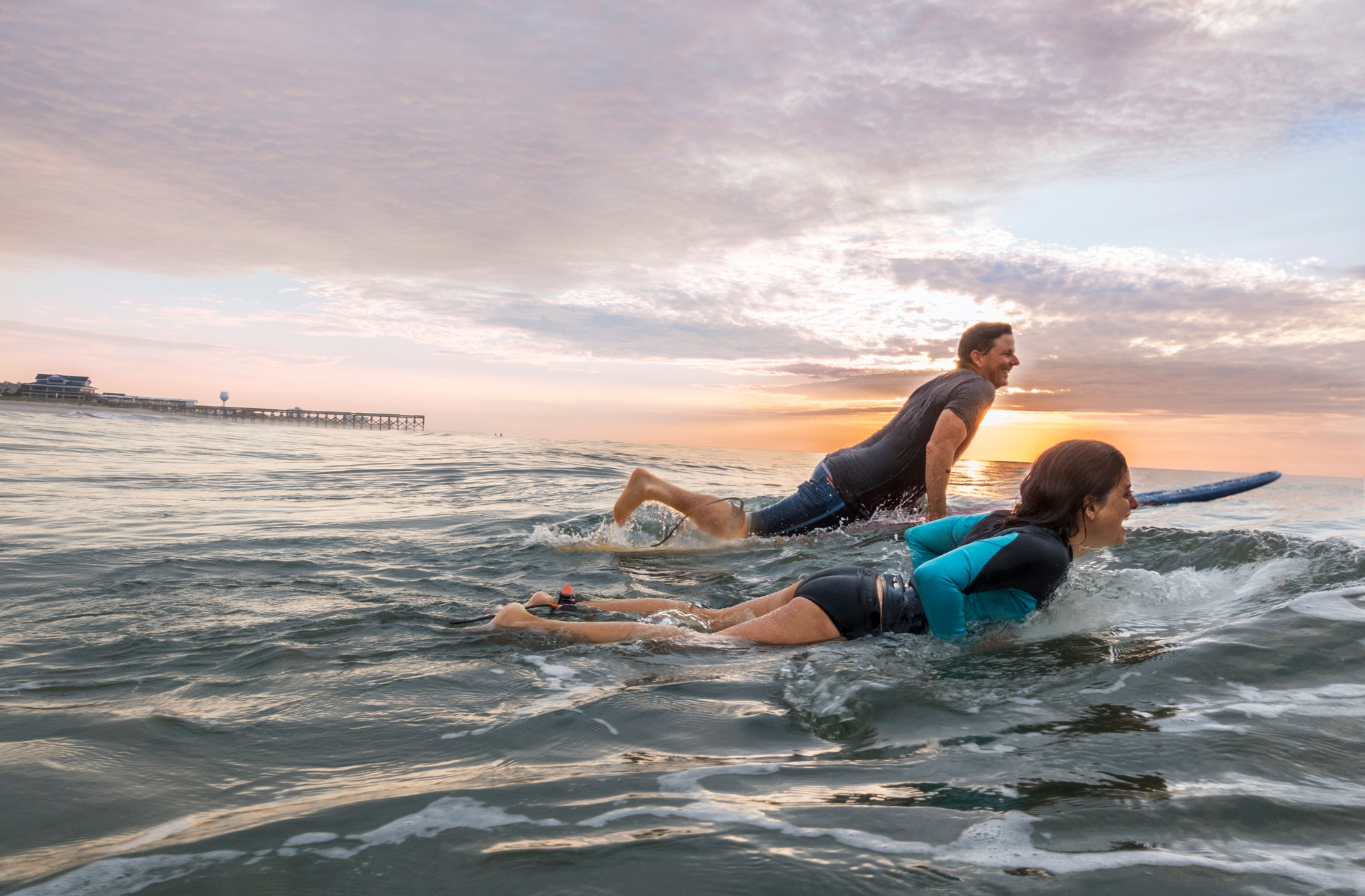 Wilmington, North Carolina, can boast several accolades, including being named one of the Top 100 Best Places to Live (by livability.com in 2020); earning the nickname “Hollywood East” thanks to the many movies and television shows that have filmed there; making the list of the Top 5 Beeriest Beach Towns (according to craftbeer.com), and being named one of a dozen Distinctive Tourist Destinations by the National Trust for Historic Preservation. That’s quite the list and there are actually many more, all of which provide plenty of reasons to visit this southern charmer.

The history of this port city that sits on the southern North Carolina coastline dates back to the 16th century. Way back in the early 1500s, France sent an expedition, headed by Italian explorer Giovanni da Verrazzano (who also explored much of the Atlantic Coast), to explore the Cape Fear River. In 1724, a permanent settlement was established and the area quickly became a major port city due to its proximity to the Cape Fear River. The area, and the River, also played major roles in both the Revolutionary and Civil Wars. During World War II, it was an important site for shipbuilding where more than 200 ships were built for the Maritime Commission and the U.S. Navy at the North Carolina Shipbuilding Company.

The bustling port city had many names dating from the early settlement days, including the initial Brunswick Town, as well as New Liverpool, New Carthage and Newton. Then in 1739, the city was incorporated and named for the Earl of Wilmington.

The city today has much of its downtown listed in the National Register of Historic Places. Thalian Hall, the city’s performing arts center is one such place. Built in the late 1850s and designed by one of the foremost architects of the time, John Montague Trimble, it originally served as the city’s library, city hall, and opera house. Thalian Hall continues to serve as a performing arts center today and remains as popular for touring productions and concerts as it was when originally built. Wilmington is a wonderful mix of past and present where historic and modern-day attractions combine to make Wilmington a perfect vacation destination.

Walking tours are a great way to get to know a city and Wilmington has several, many of which are self-guided and available by downloading an app to your smartphone (for a small fee). The Wilmington tours app offers five different tours including Civil War Wilmington, African-American History, and Pub Crawl Wilmington (check out wilmingtonhistory.com/apptours for more information). There are also foodie tours (tastecarolina.net), ghost walks (hauntedwilmington.com), and several sight-seeing walks offered through gpsmycity.com. Walk your way through Wilmington any way you please and get to know this lovely city.

One of the many jewels of Wilmington is the Riverwalk, which runs 1.75 miles along the Cape Fear River and offers shops, galleries, and eateries with outdoor dining options, as well as historic sites for visitors and townsfolk alike to enjoy. Fishing from the Riverwalk is even a possibility at the Conlon Pier portion of this award-winning walkway. The Riverwalk is also home to art installations and plenty of outdoor entertainment and is a delight to explore day or night.

Speaking of art, there are a few must-sees for the art lovers visiting Wilmington. The Cameron Art Museum is home to both indoor and outdoor works as well as nature trails on the 9.3-acre museum campus. Another art option is Acme Art Studios, which is an artist community with working studios as well as an indoor gallery. The studio hosts events including open houses, exhibitions and a holiday show and sale.

Art in the form of architecture is on display in Wilmington through its historic pre-war mansions. The Bellamy Mansion, built between 1859 and 1861, mixes the architectural styles of Greek Revival and Italianate and is open for both self-guided and guided tours daily. It was built as a home for Dr. John Bellamy and his large family and was actually occupied by Union troops during the Civil War. Today visitors can tour the entire house as well as the grounds and gardens of the mansion. Pre-dating the Bellamy Mansion is the Burgwin-Wright House which was built in 1770 on the site of the city’s former jail. It is the only Colonial-era home in Wilmington open to the public. Visitors can see rooms furnished in the style of the 18th century as well as the beautiful gardens that consist of seven distinct areas.

Another breathtaking site is the city’s Airlie Gardens, which come springtime, are full of blooming color with the spring buds of tulips and azaleas. Set on 67 acres, the Airlie Gardens features seasonal southern blooms, art installations, walking trails, and is considered a great birding site as more than 200 species of our feathered friends have been spotted here. Don’t miss the Airlie Oak, a 500-year-old southern live oak that makes its home at the Gardens. The Gardens also hosts annual events including the Azalea Festival held each April, a series of summer concerts, and Enchanted Airlie, a holiday event featuring festive lights and sounds of the season, that runs for several weeks beginning in late November each year.

If we’re talking festivals, then you might want to consider a visit to Wilmington when they host their annual Riverfest, which is held each year during the first full weekend of October. Held in the historic downtown, it’s everything you’d expect from a street festival and more, including fireworks, an arts and crafts exhibit, live entertainment, food vendors, and even the crowning of Miss Riverfest! For details on the 2021 event, visit wilmingtonriverfest.com.

Fans of Marvel’s Iron Man franchise will be interested to know that the scene in Iron Man 3 where Tony’s Stark’s mountainside home falls into the Pacific Ocean was actually filmed in its entirety in the EUE/Screen Gems Studios in Wilmington. Since 1985, more than 350 films and television shows have been made here. While tours are currently on hold due to COVID-19 restrictions, information is available by calling (910) 343-3500. You can certainly walk or drive to other filming spots that might look familiar to you if you’re a fan of television’s One Tree Hill or Dawson’s Creek or movies including the afore-mentioned Iron Man 3, as well as Nicholas Sparks’ book-to-movie tear-jerkers such as the Longest Ride and Safe Haven. Visit wilmingtonandbeaches.com/things-to-do/tours-and-cruises to find locations and downloadable guides to see these Hollywood East spots!

And, if Wilmington is one of the best places to live, it should most definitely be one of the best places to visit for some of the same reasons it received the nod in the first place. The mild weather played into that decision and hand in hand with good weather goes the opportunity to enjoy the outdoors. Combine a history lesson with an outdoor adventure by visiting the Fort Fisher State Historic Site and Museum, which was the site of the largest land-sea battle of the Civil War. Walk the scenic outdoor trail and learn the history through the interpretive exhibit panels. More maritime history can be explored on the decks of the USS North Carolina which is moored near downtown Wilmington. Through photographs and other mementos, visitors can learn about what life was like serving in the Pacific Theater during World War II.

Halyburton Memorial Park has a 1.3-mile birding and walking trail while Blue Clay Bike Park is great for cyclists, thanks to the eight-mile off-road trail found here. There are plenty of golf courses, both public and private, for all levels of golfers and the Bluethenthal Wildflower Preserve, found on the University of North Carolina’s Wilmington campus, provides lovely hiking opportunities among a wooded and wildflower trail.

Learn the history and the importance of the Cape Fear River on a variety of cruises offered through Cape Fear Riverboats which include both sightseeing and sunset cruises.