Take it to the Bridge 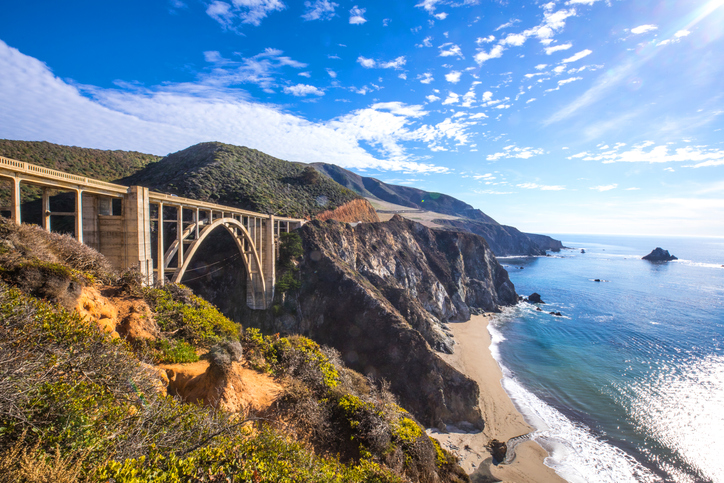 They are functional works of art made of steel, stone and wood…check out some of America’s coolest bridges.

There are more than 600,000 bridges in the U.S. Some were designed to allow travel over bodies of water, train yards or other roadways, large gorges, or other unnavigable terrains between two locations. There are bridges of all kinds of design and materials. From arched bridges, suspension bridges, cantilever, and cable bridges, with materials ranging from wood to stone, to steel.

The oldest surviving roadway bridge in the U.S. is the Frankford Avenue Bridge in Northeast Philadelphia. Also known as the King’s Highway Bridge, or the Pennypack Creek Bridge, it was built in 1697, and is classified as a twin stone arch bridge

Check out some of these wonders of engineering located near our campgrounds:

A favorite of photographers, the Bixby Bridge was completed in 1932 and is a concrete open-spandrel arch bridge. Its such an iconic part of the California coast, it has its own postage stamp.

When it first opened in 1937, the Golden Gate Bridge was the longest and tallest suspension bridge in the world. It certainly is one of the most iconic pieces of Americana and a possibly one of the most well-known bridges in the world. It is constructed of steel, carries six lanes of traffic crossing the Golden Gate (which is what the opening of the San Francisco Bay into the Pacific Ocean is called). An estimated 110,000 cars across the bridge daily that takes travelers from the San Francisco Bay to Marin County.

Designed by famed architect Frank Gehry, this 925-foot long winding bridge provides pedestrians views of Chicago’s Millennium park as well as the Chicago skyline. In addition to the aesthetic it provides, the bridge provides as a way of access for those with disabilities to get from one end to the other of Chicago’s Grant Park as well as provide a noise barrier from the nearby traffic.

This bridge, which opened in 2010, was named for O’Callaghan, who served as Governor of Nevada from 1971 to 1979 and Pat Tillman, the Arizona Cardinals football player who gave up his NFL career to enlist in the Army after the 9/11 attacks and was killed by friendly fire in Afghanistan in 2004. The bridge spans the Colorado River between Arizona and Nevada. It is the first concrete-and-steel composite arch bridge built in the US and is the second highest bridge in the country at 840 feet above the Colorado River.

Listed on the National Register of Historic Places, the Sachs Bridge is a 100-foot Town truss bridge constructed of wooden beams. It was built in 1854 and during the Battle of Gettysburg in July of 1863, it was used by both Union and Confederate armies. It is said to be haunted.
(Gettysburg Farm RV Campground is the nearest location.)

Bridge of the Gods – Oregon/Washington

This bridge spans the Columbia River between Oregon and Washington and opened in 1926. It is a steel truss cantilever bridge. A portion of the Pacific Crest Trail crosses this bridge although there is no pedestrian path for crossing and to cross by foot you must walk single file along the barrier while facing traffic.