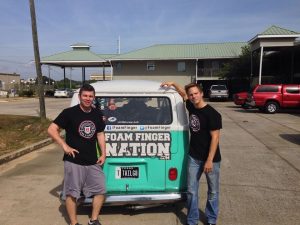 This month, we chatted with Rhett Grametbauer, who visited all 30 NFL stadiums in one season and wrote a book, 25,000 Miles to Glory, about his experience.

Rhett Grametbauer, an intensely passionate football fan, writer, filmmaker, entrepreneur, and proud owner of a 1967 split-window VW Bus decided to live out a childhood dream of visiting every NFL stadium in one season—travelling in his bus, “Hail Mary.” Accompanied by fellow football fan and producer, Grayson Berry, the two adventurers set out to discover the NFL through the colorful lens of its fans, making it to every stadium and taking in 32 games in 16 weeks.

The resulting book, 25,000 Miles to Glory: Football, Freedom, Friendship, and America, was released in 2016. A fun 90-minute documentary film was also released the same year.

What prompted you to take this trailblazing trip, which resulted in the book and even a film?

I’ve been a football fan my entire life and I grew up in what I would consider to be the golden age of football. Steve Sabol and NFL Films made football games into stories and the players into larger than life characters.

The stadiums were something that I found fascinating and always wanted to see them in person. Sadly, the stadiums that I grew up with are quickly being replaced. It would have been a tragedy to have places like Candlestick Park, Jack Murphy Stadium, Arrowhead Stadium, the Metrodome, and others be destroyed without me seeing them in person.

Tell us specs, history, and the “Hail Mary” name of your Volkswagen Bus. 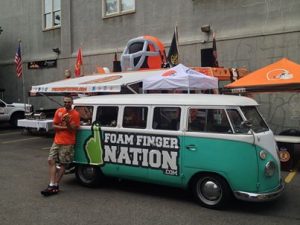 Hail Mary is named after the famous football play in 1975 of Dallas Cowboys quarterback Roger Staubach and wide receiver Drew Pearson that beat the Vikings. She is a 1967 Split-Window Volkswagen Bus that I bought in 2011 for the sole purpose to tailgate. I have made a few modifications, but she still struggles to go 60 mph downhill. The VW Bus did not have air conditioning and for most of the trip our heater was not connected. It is a four-speed manual transmission [with] no power steering that rides five people and uncomfortably sleeps three. Other perks of driving Hail Mary on the trip were that she didn’t have windshield wipers for most of the trip, took on water during heavy rains, and overheated in the September heat.

What was your favorite thing about travelling to the stadiums in your VW?

Driving a split-window VW Bus is unlike any experience. It is not the perfect road trip vehicle, despite all of the romantic notions that people have when looking at the bus. As I was told on the trip, a VW Bus is not made for long road trips. This was news to me, but despite the discomfort of riding in a VW Bus for over 25,000 miles, there are many positives from the experience.

The VW Bus attracts everyone. We didn’t stop at a gas station, a restaurant, or go through a city without someone telling us their VW story. The VW community is extremely close and many times air-cooled VW people around the country helped us to stay on the road. I also think driving to the stadiums in Hail Mary added a certain flair for our arrival. It was not long before word spread from city to city that we were coming. Everyone wanted to see Hail Mary even more than they wanted to meet the people that were on the trip.

What were a few favorite things onboard? 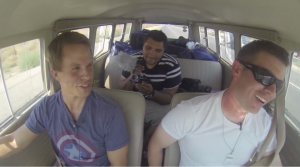 Ironically, and not while you are going through them, but the struggles were some of my favorite things. Breaking down at 3:00am in rural North Carolina, or just outside of Pensacola, and having to call on “Wild Bill” to get you going again were strangely enjoyable experiences. To test yourself and the team around you to see if you can stay on the road and make it to the next stadium was an unforgettable experience.

I drove the entire way and some of the scenery that you get to see when traveling the country at all hours of the day and night, along with the unique perspective a VW Bus provides, are memories I will have with me forever. In New Mexico, it felt like I was driving in the stars. I have never seen such a beautiful sky.

Driving a VW Bus and worrying about making it to your next destination and breaking your life down from game to game forces you to live in the moment. You become more aware of the people, places, and things around you. I relive a little bit of the trip every day.

What was your favorite stadium and why? 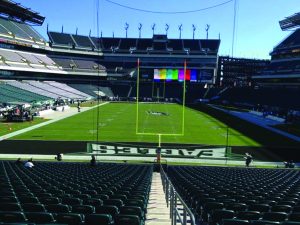 It is difficult for me to separate the stadium from the awesome fans we met of each team and the atmosphere around the stadium. I have written about my experience at the Bills game and Hammer’s Lot. That should be on everyone’s football bucket list. Cleveland with the Pumpkin Nation is one of the best, if not the best, in the NFL. I would love to spend a football season in Cleveland and immerse myself in everything Browns and I am not a Browns fan, but that is just how great the people are in Cleveland. Denver on opening night of the season was a great experience as well. There isn’t really a bad experience to be had in the NFL.

For actual stadiums, the Cowboys, Seahawks, Broncos, Eagles, Steelers, to name just a few, have really great stadiums, but if I had to pick a stadium that was my favorite it would be Arrowhead Stadium. I am not a Chiefs fan, but grew up watching their games on NBC with Merlin Olson and Dick Enberg. It was always a loud stadium and became an iconic place to a young football fan. To see it in person and experience everything Arrowhead was a dream come true.

Tell us about the tailgating.

Tailgating has almost become an art and it is open to interpretation from stadium to stadium as to what tailgating means. To some, it means  a giant RV and to others it’s wherever you can find a flat piece of land to eat, drink, and be merry. The commonality between every stop is the camaraderie between fans…

The beauty of tailgating is it breaks down all of the artificial barriers that society has put in place in getting to know someone. All that really matters is that you are a football fan and looking to enjoy yourself before the game. It is amazing how many people welcomed us (complete strangers) into their lives and tailgates. I don’t know how big their houses are, what they do for a living, or what kind of car they drive, but I do know how great of people they are and what interesting stories they tell. After this trip I feel like I have made friends for life all around the country.

Do you have any funny stories from the road you can share? 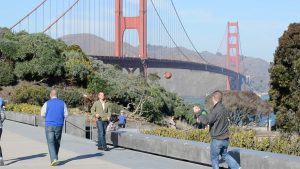 When we were in Philadelphia going around the art museum with our producer at NFL Films, there was a Ferrari that pulled up next to us at a stop light. I made eye contact with the driver of the Ferrari and gestured that we wanted to race. [I’d] never met the producer at NFL Films before, but I am sure he enjoyed Hail Mary trying to beat an Italian sports car.

There was another time when NFL Films had a camera crew ride with us in Hail Mary. The cameraman’s first and last question was, “Does it always smell like gas and oil in here?” We had become oblivious to the ambience in Hail Mary.

Tell us about the book and the film.

The story of 25,000 Miles to Glory is more than just football. To me it is about pursuing a lifelong dream. This could have been about anything, but for me it just happened to be football. Everyone has or should have a dream and what I try to convey is that we did not have any advantages or resources, but that somehow made us more resourceful. 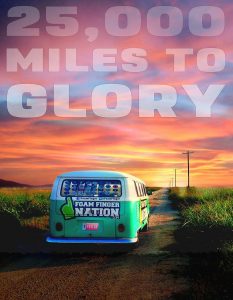 Just as there is more to my story, there is more to the story of the people we interview besides football. Football and their NFL team is just what makes those people come alive. When you see the film or read the book, it is important to see these people as more than face painting fans or strange devotees to the Volkswagen Bus. These are people that have come alive because of football or a VW Bus, just as this trip helped me to come alive and actually live a life.

I think if all you get from the story is football, then you will be happy and have enjoyed the film or book but will have missed much of the deeper meaning behind the story and lessons that can help you in your own life. Treat others with kindness and enjoy them for who they are, regardless of what team they root for, embrace each day, and see it as an opportunity to work towards living a dream.

We ran out of brakes three times and had countless issues in between, but we made it. If someone says they watched or read 25,000 Miles to Glory and found inspiration for their own lives, then the experience and all of the suffering will have been worth it.

What is the next big adventure for Hail Mary?

Hail Mary is constantly asking to hit the road again, but we have no definite plans.

To embark on a lifelong dream of your own, take your first step by visiting our website, thousandtrails.com.

Tags: NFL On the road VW Van
Categories: On the Road